Sri Abirami Amman Sametha Sri Amirthakadeswarar Temple has a rich and colourful history and has been used for worship, prayer, devotion and festivals for thousands of years.

As one of the oldest established Pooja booking offices in Thirukadaiyur, we are proud to have looked after thousands of visitors for all aspects of their trip.

We are able to organise as much or as little as you need, so that you can be sure to enjoy your celebration or blessing and have complete trust in our services.

We believe that it is an honour and a privilege for us to help you with the arrangements you need and so we offer the assistance of a dedicated contact for your booking who will be able to help take care of you and all the arrangements. 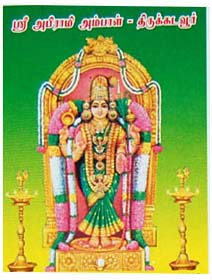 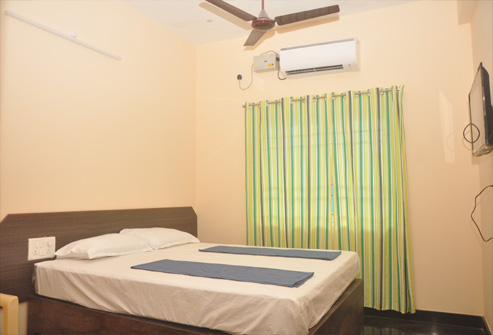 Some of the services we offer:

All our team members are professionals with many years’ experience, so you can rest assured that we will look after you with the utmost care and attention.

Thirukadaiyur Temple is one of the eight Veeratanam (Avatharams) of Lord Shiva, this being the eighth Veeratanam.

The temple is also popularly known as Thirukadaiyur Temple, (Thirukadavoor), derived from the town where it is located, in the Tanjore District, Tamil Nadu, India, just 18km from Mayiladuthurai.

The magnificent buildings stand in approximately 11 acres of land and the main buildings are believed to have been built in the 10th or 11th centuries.

Thirukadaiyur Temple is west-facing and has its own unique holy trees within its grounds, the Pinchilam tree, which is around 2000 years old and the Vilvam or Bael tree as its Thala Virtcha.

The temple deities are the three Tamil trinities known as Appar, Sundar and Thirugna. The ancient Tamil poets named Thirunavukkarasar, Sundarar and Thirugnanasambandar also wrote many devotional poems in praise of this temple. 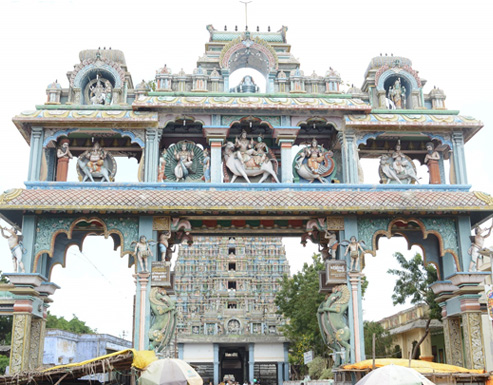 Legend has it that in ancient times, the devas and asuras were about to share out and enjoy their amirtham (a type of ambrosia). In their excitement and haste, they forgot to worship Lord Ganesh (often called Vinayakar in southern regions of India), the first and foremost god for all Hindus.

This lack of respect angered Lord Ganesh and so he hid the pot containing the amirtham (called amirthakalasam) in Thiruparkadal, at the temple.

The amirthakalasam later became the shivalingam at this temple, a representation of Lord Shiva and his masculine energy.

Historical legend also recognises Thirukadaiyur as the place where Lord Shiva bestowed immortality to Sri Maarkandaya, who forever remained at the age of 16.

Lord Shiva was so moved by the devotion shown by Maarkandaya that he asked the God of Death, Yaksha (Yaman) to spare the boy’s life, but Yaksha ignored Lord Shiva’s orders.

Lord Shiva then immobilised Yaksha, allowing the boy to escape and then gifted the boy with eternal life. Lord Shiva is known as Lord Mirthunjayamoorthi, literally meaning ‘Conqueror of Death’ in recognition of his power over Yaksha. 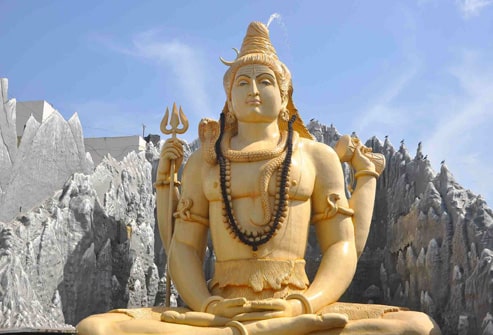 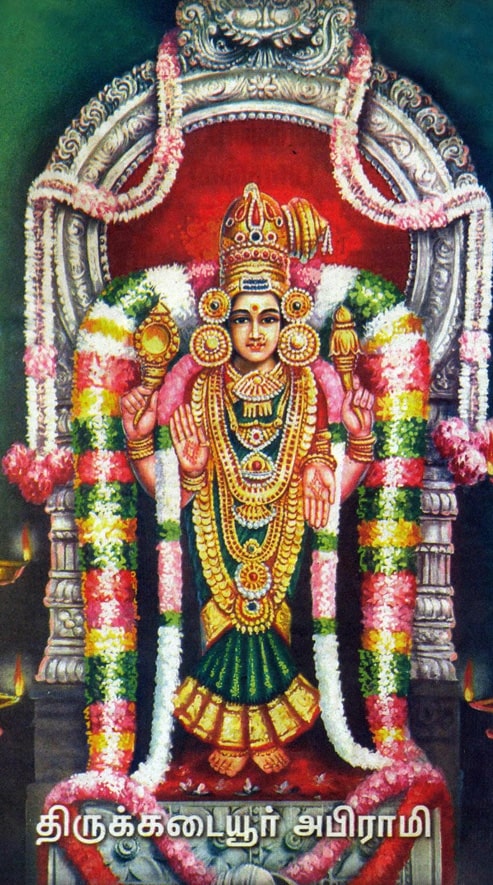 Yet another legend associated with Thirukadaiyur Temple is that related to the beautiful deity, Goddess Abirami, borne from Lord Mahavishnu’s necklace to come to the people as Amman Sakthi.

Subramaniya Iyer was born in Thirukadaiyur in the early 18th century. Subramaniya was always drawn to the temple and the Goddess Abirami from an early age and became a poet when he grew up. His devotion to the Goddess became so fervent that he beacme a temple priest and would often be seen at the temple, acting in a strange way, completely obsessed in his devotion.

One day, King Serfoji was passing through the village when he noticed Subramaniya acting strangely at the temple. The King asked the other priests about Subramaniya; one said that he was a madman, another said that he was completely engrossed in his devotion.

The king could see nothing in the sky and declared that unless a full moon could be seen by that evening, Subramaniya would be beheaded.

Subramaniya immediately realised his mistake. He built a platform held up by a 100 ropes and a large fire, and started to sing devotional hymns to Goddess Abirami to come to his aid and as he sung each verse, he cut a rope.

On the 79th verse, Goddess Abirami manifested herself in front of him and threw her stud high into the sky, which shone so brightly that it looked like the full moon had appeared. All around the temple sparkled in the dazzling light. The ecstatic Subramaniya composed 21 more verses in praise of the Goddess.

The king realised that Subramaniya was indeed a true and passionate devotee and cancelled the punishment, replacing it with a great title of Abhirami Pattar, meaning ‘Priest of Goddess Abhirami’.

The 100 verses or hymns composed by Subramaniya are known as the Abhirami Anthadhi.

Thirukadaiyur Temple remains a highly revered place of worship and devotion to many Hindus, especially in the Tamil Nadu region.

Another important ceremony conducted here is the Ayush Homam, which is to remove future astrological difficulties for children, arising from the inauspicious positions of the nine planets,or navagrahas, at the time of the child’s birth.

The ceremony of Mrithunjaya Homam is performed to ask Lord Shiva to remove a serious illness or disease that a person is suffering from, or even to save that person’s life.

Another famous event held at the temple is Yama-samharam, which takes place annually during the first month of the Tamil calendar, Chithirai (Mesha Month) and marks the celebration of Lord Shiva overpowering Yaksha, in order to save the life of Lord Shiva’s devotee, Maakandeyar.

Thirukadaiyur is also famous for an annual event held in Kaarthigai (Viruchiga Month), on each and every Monday during Somavarams, when the priests perform ‘Sankaa-abishegam’ with 1008 Sankus to the Deities to receive blessings for the welfare of the people.

This temple is maintained, administered and controlled by Dharmapuram Adheenam Mutt. 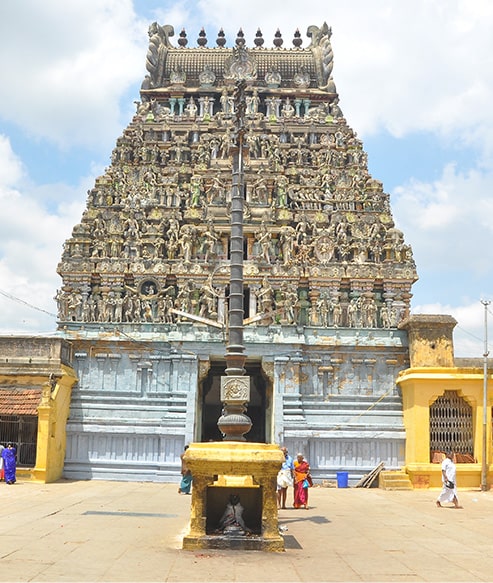 The temple is open to all visitors between 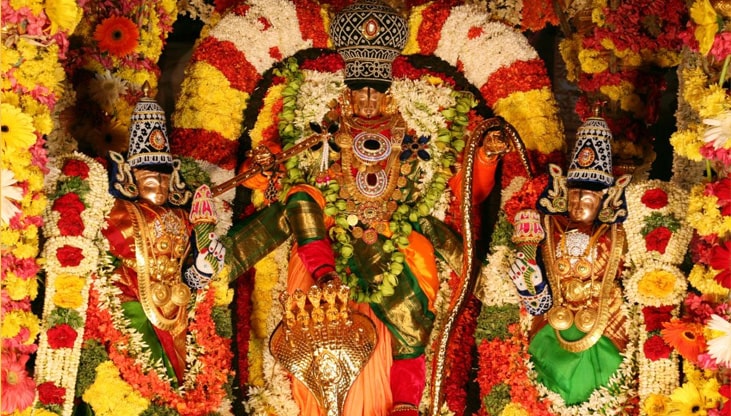 All our accommodation is supplied to you through our carefully selected suppliers to ensure that your stay is comfortable for you, your family and guests.

Accommodation can be arranged for small or large groups, in one location or multiple places depending on your individual needs and requirements.

All accommodation is within very easy reach of Thirukadaiyur Temple itself and we can also arrange transport if required.

Deluxe double room can accommodate 2 no of adults. Most suitable for couples and the size enables you to relax and feel at home.

Budget double room can accommodate 2 no of adults. Most suitable for couples and the size enables you to relax and feel at home.